The many hours of personal studies early in the week included a trip to the Novak’s that not only meant a great study, but also a home-cooked meal.  Honza spends a lot of time in the text and, while he calls me in the States with some of his questions on a regular basis, he saves some up as well for when we are together.  He has been spending a lot of time in Kings and Chronicles, and as you know, that is fertile soil for question production.  As modern as Prague has become, the trip from the city-center to the suburbs is a bit like stepping back in time.  The subway is still crowded, and even on a cold and rainy day the milk truck is still set up by the subway exit. 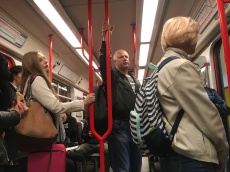