Being back in Brno for a lecture fills my heart with joy for so many reasons.  We often remind ourselves of how prayer and perseverance pay off, but we may not often have such tangible signs of it.  Admittedly, I was a bit unsure about the lecture topic they had assigned me for this particular night.  I know that the 500 Year Anniversary of the Reformation is a huge deal in the grand scheme of things, best I wasn’t sure how it would play in this blue collar city.  I also knew that Tomas was hoping the practical aspects of it would help people he is studying with, but I just wasn’t sure.  As happens often enough, I was wrong.  Sometimes my error is such a wonderful thing!  The crowd came early and stayed late.  As I discussed the causes of the Reformation and its practical implications for today, the people responded well.  Perhaps the most encouraging response came from an avowed atheist who, based on his response, made great strides in overcoming his prejudices.

The demographics of the crowd let me grateful as well.  While we only had about 20 “visitors,” I’m guessing 20 visitors on any given night night of our gospel meetings would be judged as a true success- especially if those visitors were from the community as opposed to neighboring congregations.  The second encouraging aspect of this was that several of these have now been to multiple lectures.  Finally, a few of them were people who are studying with member of the church in Brno.  We are already looking forward to next time.  One of the visitors even suggested another great topic.  The recurring problem is that I never have enough time here. 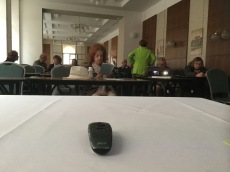